Thai Culture – Believe in karma and set the bird free

Approaching the temple grounds, I had to navigate my way through the street food vendors and the array of fortune tellers who’d set up their tables outside using a number of divination techniques to inform the superstitious, and gullible, of their fate.

Once inside, for some bizarre reason, I decided to buy a coffin.  It was not a very impressive coffin, it looked more like a box one might use for freight purposes, but for 500 baht I figured it was a steal. I have to say that I didn’t purchase it for my own use; I wouldn’t really care what they put me in once I’d snuffed it, so to speak.

One doesn’t even need to buy a whole coffin, you can just make a simple donation towards one, but I was feeling flush this day.  I even considered buying two but changed my mind at the last minute.  You see, coffin donation is considered a form of merit making for Buddhists in Thailand, but even for non-Buddhists, it’s still deemed an act of compassion that could have a positive effect on your karma. 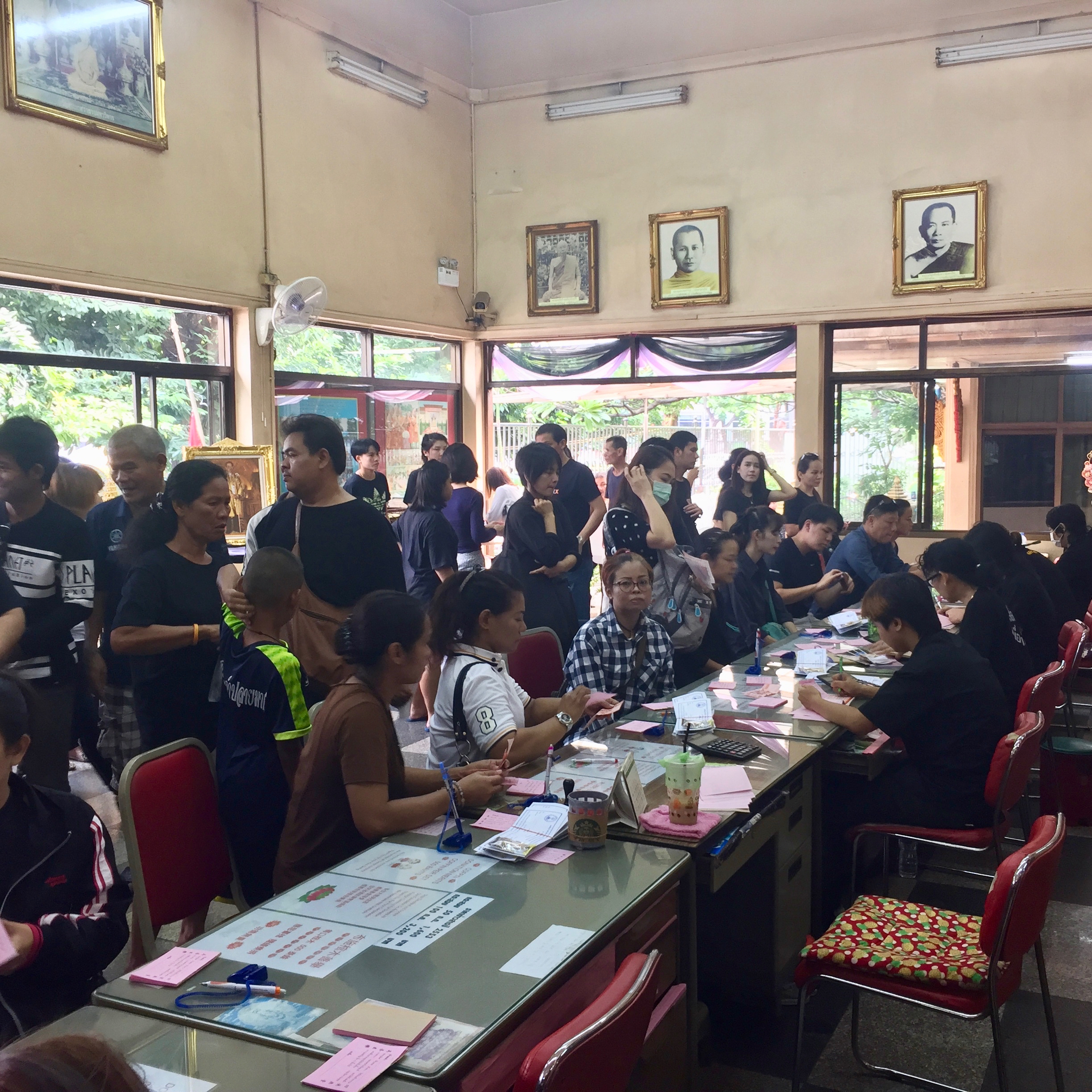 Making merit by donating towards the cost of a coffin

I’d been wandering round Wat Hua Lamphong, a temple on Rama 4 Road, which is also known to locals as the Coffin Temple which houses a large crematorium, and hence the coffins.  It was explained to me that my 500 baht donation would go towards the payment for the coffin and the burial ceremony for some unfortunate sole that could not afford the cost of death rites.

I sat down and gave my money to one of the temple employees. In return I was issued with a pink ticket and ushered into a room where there were rows of coffins stacked one upon another, all identical in shape, size and design.  I saw some locals applying glue to the back of their tickets and sticking them on a particular coffin.  Some women were even taking selfies of themselves smiling while doing this, which I thought a bit macabre at the time. Sadly, I must say, at least from my personal observations, that seems to be the way many Thais view making so called merit as in it’s often not selfless, but for financial, personal or family gain for one reason or another.  Well, who can blame them I suppose? 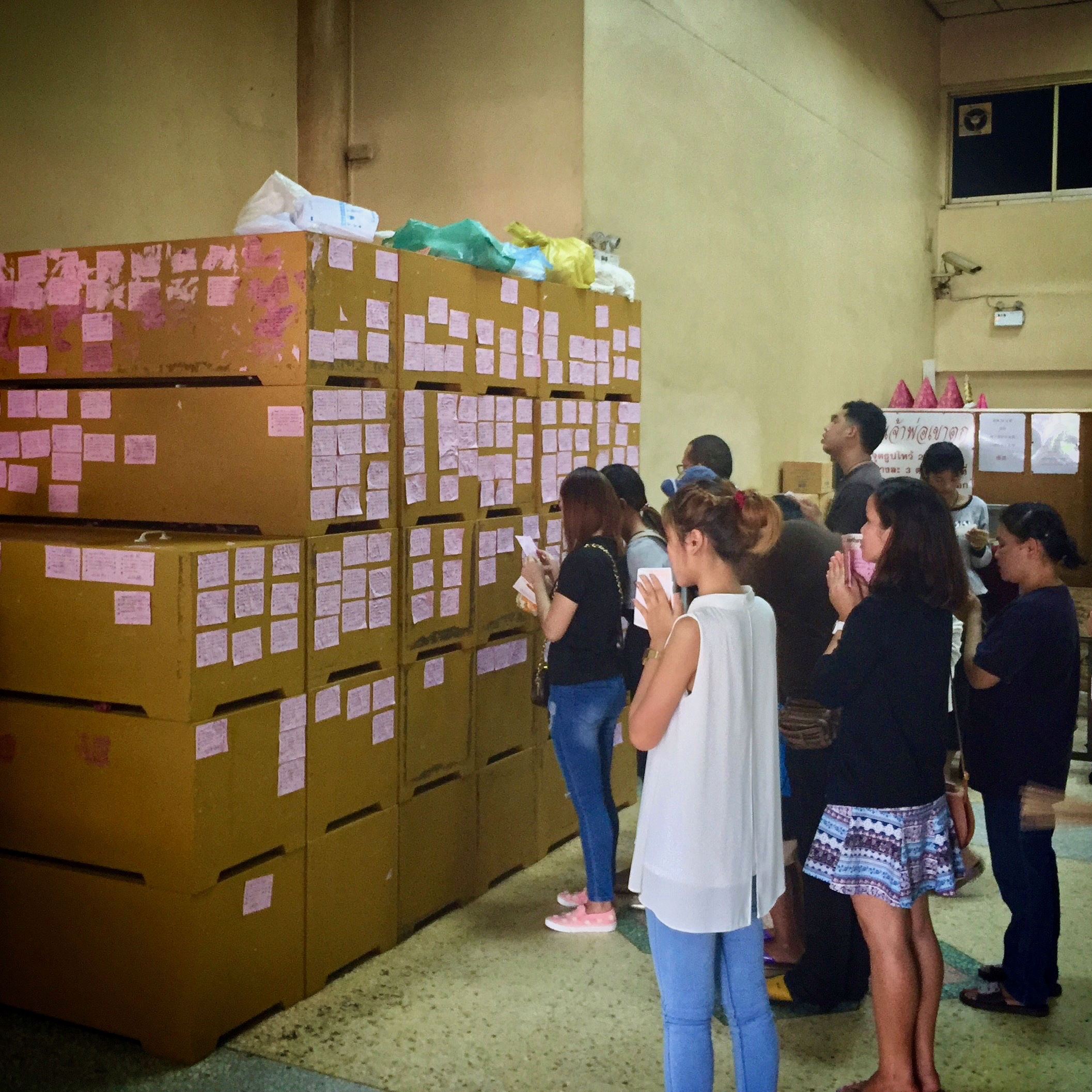 Praying in front of the empty coffins

I was unsure as to which coffin I was supposed to put my ticket on, so I asked another temple employee, a lady-boy as it happens, which one I should opt for.  She looked a bit perplexed and asked me why it mattered. I answered that I didn’t want to buy a coffin for a rapist or murderer, to which she gasped and then giggled. I was told that the coffins did not yet have occupants, and that no one knew whose corpse would be the recipient of my charity, at the moment they were all just empty vessels.

When I left the temple the fortune tellers were still sat at their tables, I figured that my coffin purchase experience would not be complete without seeing whether my merit making deed was going to pay dividends.

I chose a Tarot card guy, not because I put more faith in that than other forms of fortune telling, it’s just that his English was quite good. The news that he imparted to me was anything but good.  He told me to avoid riding motorbikes or getting on motorbike taxis for at least six months as he foresaw a bad road traffic accident in my not too distant future.  I expressed surprise, saying “But I’ve just bought a coffin for someone in the temple, and I thought that would bring me the opposite of bad luck such as a nasty traffic accident”.  With no emotion and no hint of a smile he replied “Nasty, it may be worse than nasty, you may have just bought that coffin for yourself”.

Now, I’m not an overly superstitious person but living in Thailand has made me somewhat more so, simply because so many of the locals are. Perhaps it just rubs off, but needless to say, I opted for a taxi home after that encounter and suffered a horrible traffic jam!

I was too spooked for days to get a motorbike taxi or even ride my own scooter. As it happens, about 3 months later, I did have an accident on my scooter that completely shattered my shoulder which took almost a full year to recover.  I’ve not been back to see that fortune teller guy, but maybe I ought to!