The sun had begun to make its ascent, lending the sky a temporary rose hue and illuminating the numerous shop houses and street vendors getting ready for the day’s business. Small groups of saffron-robed monks walked slowly past, others just stood motionless with their alms bowls raised, awaiting alms giving of food donations from the early morning commuters, local residents and business owners, all keen to make merit before the start of their day. 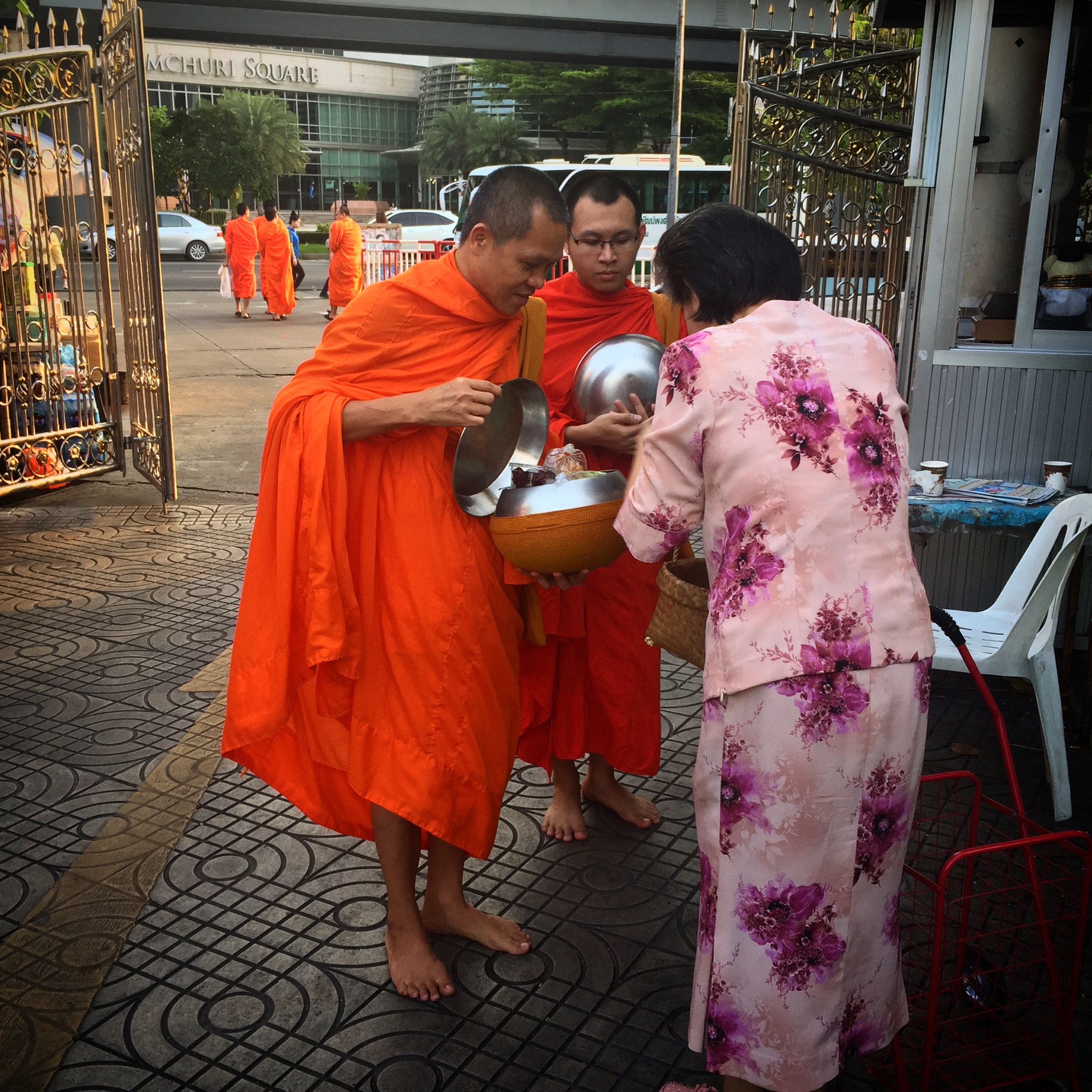 The ritual morning food donation to the monks, or alms giving, what Thais call dak bat, is a custom that is practised in other Theravada Buddhist countries like Laos, and which helps to sustain the monastic community. It’s not deemed an act of charity as such, more a spiritual obligation that bonds the laypeople to the men of the cloth, the former providing physical sustenance and the latter spiritual guidance.  It is also one of the many ways that a Theravada Buddhist can make merit, or tam boon, as the Thais say. It’s a concept in Buddhism, and Hinduism too as it happens, in that good deed acts or thoughts will bring good karma either in this life or the next. 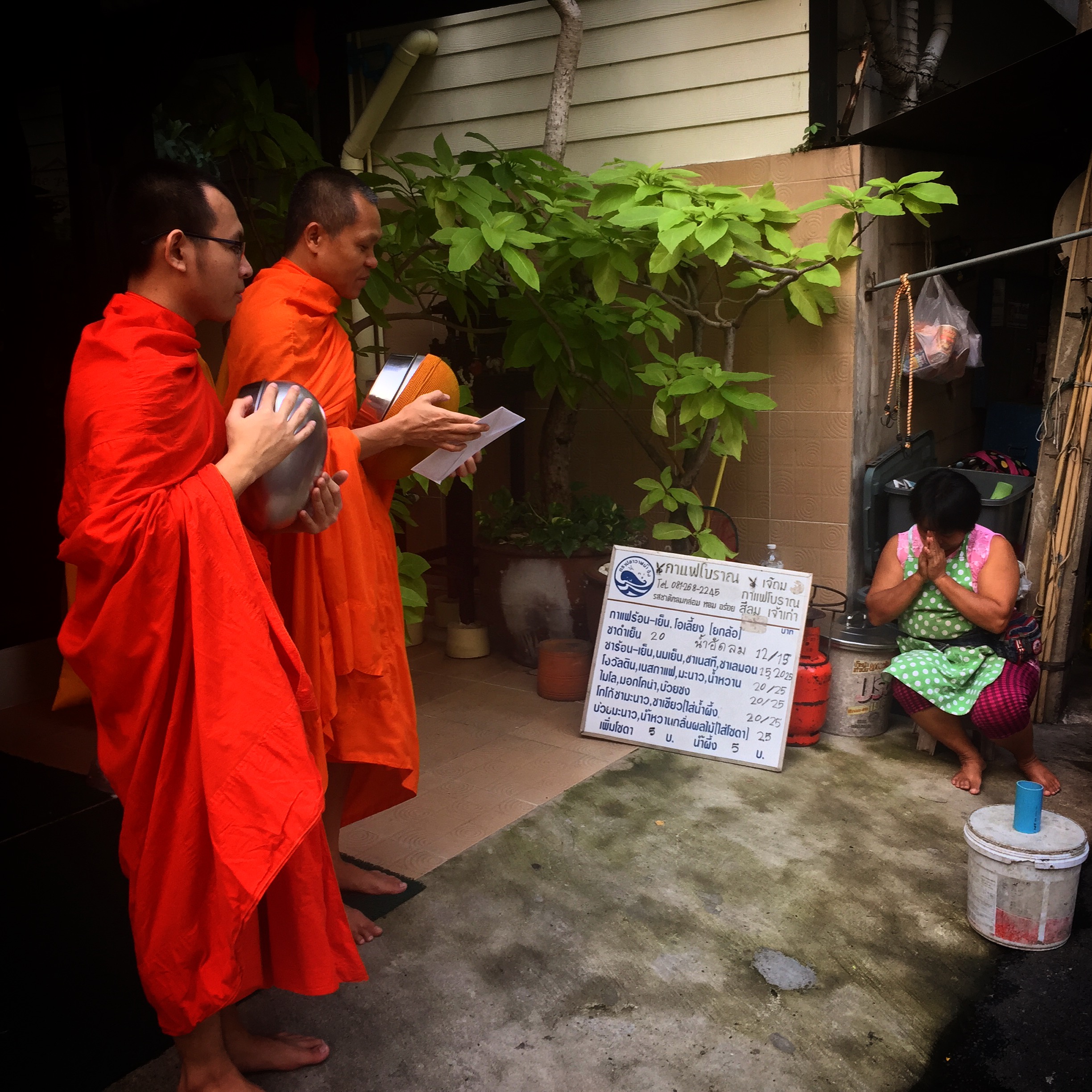 Making a wish before offering food to the monks

Contemplating that if there were any truth to karma, my life to date would indicate that I clearly had a lot to answer for in terms of charity and general kindness, in whatever previous incarnation I inhabited.

On this particular morning, as I rode my battered old Honda Wave down the road, I spotted a cluster of street vendors already open for business and made a beeline to the first stall. Purchasing enough food to feed a whole monastery I had trouble getting all the bags of piping hot street food into the basket. Hanging the rest of the bags on the handlebars I then hopped back on the scooter, and off I went to distribute it to the very brightly attired but solemn-looking holy men.

One may wonder what I was doing as a non-Buddhist performing a Buddhist ritual so early in the day, but the fact is I thought it would be a positive thing to do engaging in the local culture. There was, however, a slight and unforeseen hold up to my plan.

I had failed to realise that the road I went down to buy the food was one way only, at least on that morning!  These things are subject to change regularly in Bangkok due to the overwhelming number of vehicles on the road. So driving back up the road in the opposite direction in pursuit of the monks I was committing a traffic offence. This did not go unnoticed by two men in brown skin tight uniforms and big boots deployed nearby, one of whom charged into the middle of the road to block my way causing me to brake so hard that the bike skidded and I nearly fell off.

Whilst shouting angrily at me in Thai and broken English his colleague glared at me and whipped out his ticket book. I was asked why I was carrying so many bags of food to which I replied, in my appalling Thai, that I decided to get up early and go out and feed the monks for the first time. They both exchanged brief glances at this response, and then looked back at me, but it was obvious that the mood had suddenly shifted.  The cop who had been shouting then asked me if I was Buddhist, to which I replied “no”.  “Then why are you doing dak bat,” he asked, seeming genuinely curious at this point.  “Well, the monks need to eat, right? Does it matter that I’m not Buddhist?” I questioned. The facial expression of both officers immediately changed from one of hostility to genuine warmth.

They then both mounted their bike, with one riding pillion, and instructed me to follow them up the one-way street in the wrong direction to where most of the monks seemed to be milling around. They then helped me to distribute all the food and after they waied me and sent me on my way.  I don’t think I’d ever been waied by a Thai policeman before, or since, let alone had two of them aid and abet a clear traffic offence by a foreigner.

I questioned a Thai friend of mine over the incident a few days later; he expressed the view that had they prevented me from doing alms giving they might incur bad karma themselves. It would indicate that in the eyes of the law here in Thailand, a good deed, particularly one showing respect for local culture, overrides a mere traffic violation. Indeed, it was the Buddha himself who is quoted as saying “Neither fire, nor moisture, nor the wind can destroy the blessing of a good deed”… nor can the Thai police as it happened in this case, maybe there is such a thing as karma after all.